Lyra Choir London is a community choir.
As part of the German Canadian Club, the choir shares the passion for music as well as the German language.
However, it is not necessary to  have any experience with the German language in order to join the choir.
Lyra Choir London was founded in 1953 and plays its part in the cultural live of London since then.
Trips to Austria, Czech Republic ,Germany and Hungary are part of the choir live as well as concerts in London, Kitchener and Hamilton.
Lyra  Choir London is a member of the German Canadian Choir Associations which stretches from Windsor to Montreal and has fifteen choirs enrolled at the present time.
We also cultivate close friendships to choirs  within the London area. As a annual member of the "Journey of Hope" concert we  support the Cantorion Choir and the Celebration Choir of  London in their support of cancer research, raising up to $10,000 yearly. 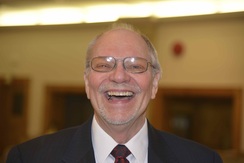 Our Conductor
Alvin Reimer, Prof. emer.
... is a native Manitoba baritone who received his early vocal training in Winnipeg. He continued his studies in German at the Nordwestdeutsche Musikakademie, specializing in German Lieder and Oratorio, as well as studying coral conducting. He graduated with  the Kuenstlerische Reifepruefung diploma, first class honour.
Alvin Reimer has conducted mixed and male choirs in Germany and Canada. He is a vocal and choral adjudicator of national and international reputation. He is Professor emeritus of voice, having served as head of the voice division for 25 years at the Don Wright Faculty of Music at the Western University of London Ontario.
Alvin Reimer is conducting the Lyra  Choir  with great enthusiasm since 2000.
Contact us